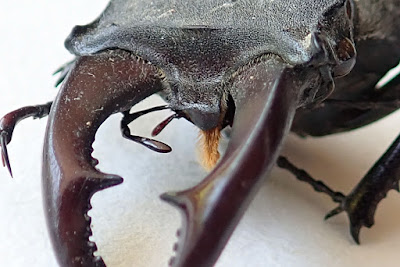 ... I like 'em chunky!
Yes! I really like big things and that also counts for big insects (as long as they don't suck my blood and stuff). I had the pleasure to meet one big exemplar at the beach and that encounter is the reason why I write down the story about my "big bug"-exhibits I found lately. But let's see more under the cut!

As you may know I come from the mountains and a big lake enriches our valley. The beaches of that lake are rough, wild and mostly natural with cliffs and trees. There' are also a lot of streams and a big river which bring water from the mountains. But the river does not only bring water, there is a lot of other things drifting in it, too. When I'm at the beach I like it to rummage in the driftwood by the shore. Something big and black caught my attention, swimming in the water: It was a big hunk of a stag beetle! 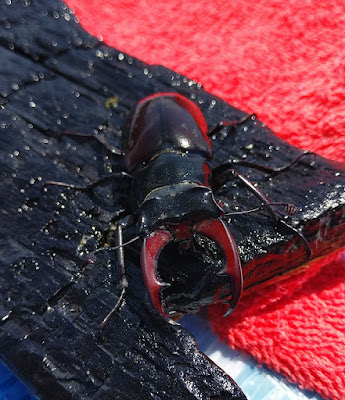 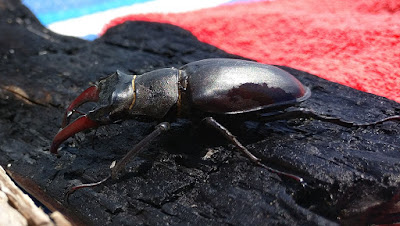 I'm sorry, black background and black beetle don't go along very well xD But the charred piece of wood was the first thing I had in my fingers by my rescue mission.

Stag beetles are a rare sight here. There' aren't a lot of oak trees in the area and the beetle itself is endangered, so I was surprised and very excited to see one! Of course I had to rescue that majestic animal. After a photo-shooting I put it in a tree nearby where it rested the whole day. Poor big guy must be very exhausted.

It was the second time I saw a stag beetle alive. Since some oak trees are standing directly above the water it's no wonder that some of the bugs fall into the wet. Fighting around and the underdog get thrown into the water. Such a fat bug is also a most welcome snack to the always "starving" gulls. Not every bug can be rescued by me, so I also found some parts/leftovers of two other stag beetles.

It was a big wish of mine to find a head of a stag beetle one time. Last year, also in the summer and also at the lake I found such a head! I was amazed and hyped, like I found the holy grail all myself!
Comparing the two heads together one looks more massy than the other. 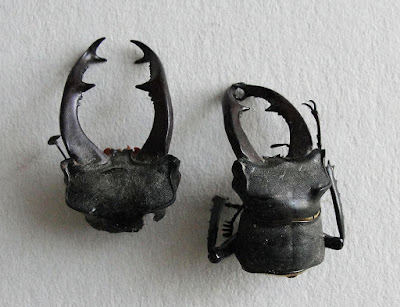 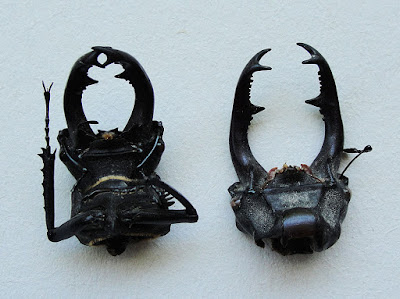 I also got a whole stag beetle in a case from my trusted taxidermist years ago. It's a very small individual compared to the massy head. Funny that there's such a difference in size. I always told that size matters when it comes to sex xD 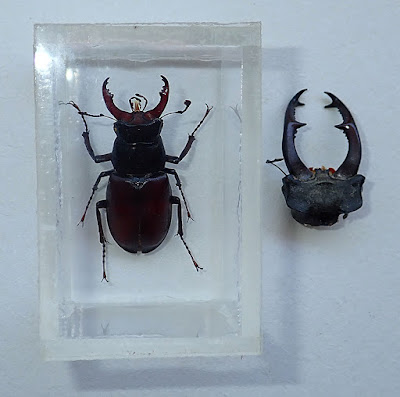 And before we go to another big beetle (and since I love my camera so much) here are some other shots of my beloved stag beetle head. 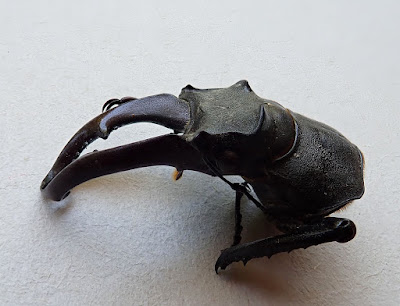 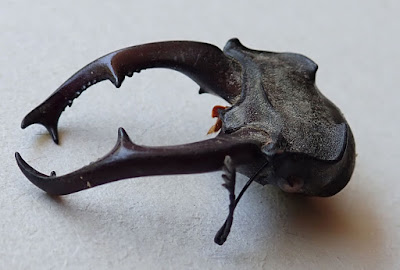 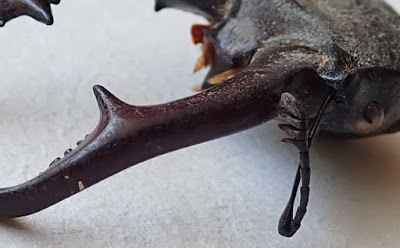 Stag beetles are rare, now we got that. But can you imagine a rarer beetle than the stag beetle which is also not very small? I couldn't, but I met one.
One of the rarest beetles in Switzerland is Rosalia alpina (Alpenbock). A very beautiful and stunning bug who lays their eggs in wood, like the stag beetle. It's larva lives also up to five years in the trunk, the imago only lives for a few weeks for doing their "job" - what a life...
The bug itself is about 3cm long with huge "antennas". Males, like here in the picture, have much longer "horns" than females. 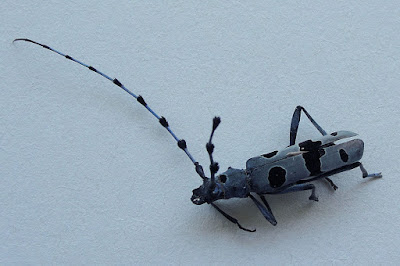 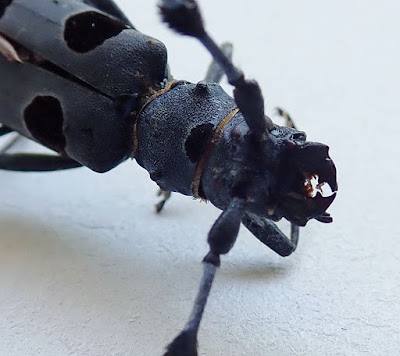 I have always mixed feelings when I find such rarities. On one hand I'm happy that I found something amazing for my collection, but on the other hand I'm also sad that such a rare and beautiful animal had to die. Sometimes it's just the course of things, that's how nature works and maybe the animal was dying a natural death anyway, like after doing their job like mating and laying eggs. I just wish they weren't endangered that hard. Let's take care about our environment.