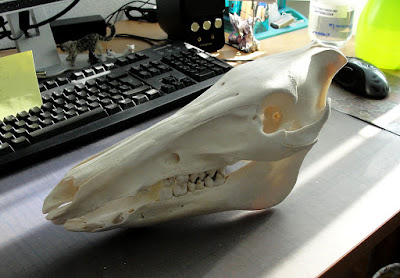 Hello folks! I was wondering about which skull I should write today and my choice fell on a wild boar skull, a young specimen. I don't know if you have special names for young boars, but in the German language we call baby wild boars "freshlings" and teenager boars are "renegades" xD. Last name is used until the young boar is about two years old and ready to leave the pack (is a group of wild boars called a pack in English?). Well, at least the young males will leave, the females will stay by their mother. Read more under the cut!

I have to admit, I don't have much experiences and knowledge about wild boars in general, so bear with me. Please feel free to correct me if I made mistakes. I'm always up to leran more :)

Back to my skull. It's from a teenager wild boar and I guess its age was about 17 month. A hunter killed it and brought it to my former boyfriend who was a butcher. He saved the skull for me, put it somewhere in the garden to rot. A nice move from him, eh?
After the meat (and some teeth) were gone the skull was still fatty. I took it home - via airplane. But the borders/customs didn't have any problems with my dirty, greasy skull in my backpack xD
To get rid of the fat in the bones my mom and I put the skull in a bath of water mixed with bleach. I know, that's not the way you do it, but hey, I didn't know it better then. After a few days, changing the water/bleach mix every day, it turned better. But it's still greasy at some points, but at least the smell is gone. Let's have a few more pictures of the skull. 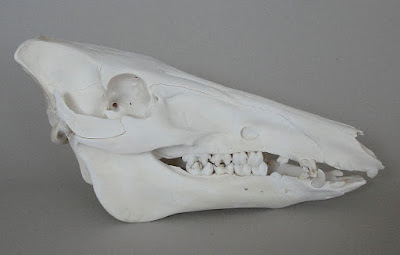 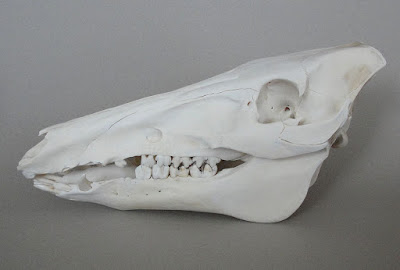 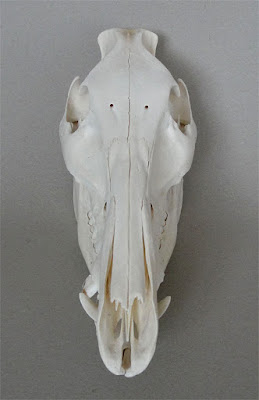 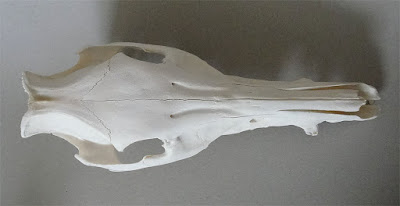 Sorry, the pictures turned out a bit... granular?
The animal was still changing its teeth, that's very interesting! Normally a wild boar is an adult after two years, when all teeth are changed/grown.
Let's have a closer look to the lower jaw. 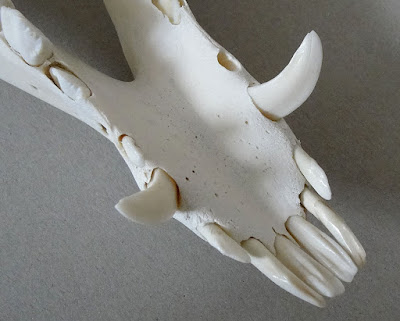 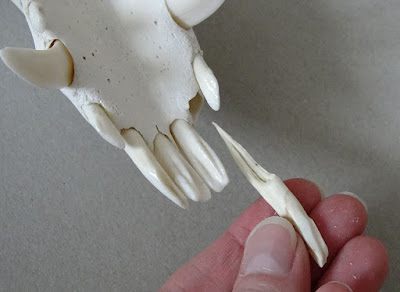 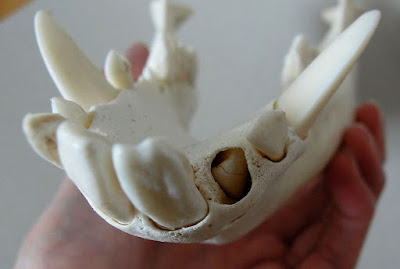 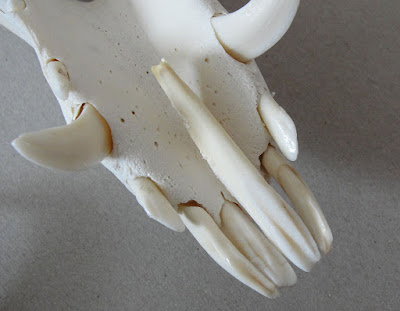 Amazing how deep some roots of teeth stick into the bone :O
Think about the tusks, they are also about two-thirds into the bone!
The middle two incisors (i1) are from the second set of teeth while the i2's are still from the first set of teeth. The tusks (c) are also already from the permanent teeth.
The two halves of the lower jaw are grown together! And that's no sign of an old adult animal like it would be by badgers. 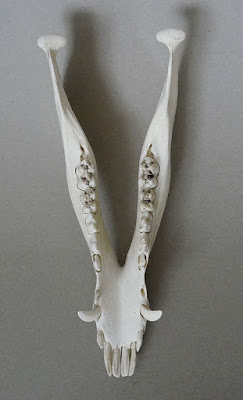 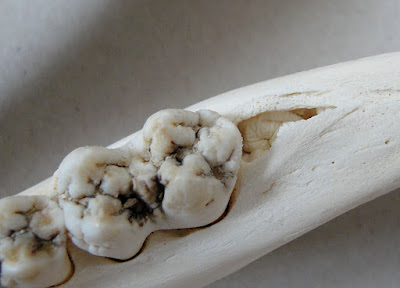 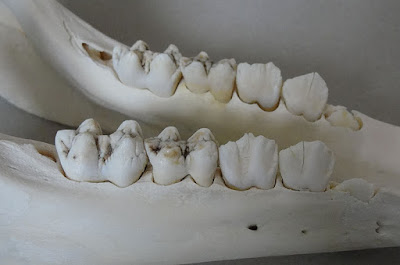 On the picture above you can see three of four premolars (from the right to the left, one is still growing). Look at the shape of these teeth, they look like teeth of a predator. When I touch them, they feel pretty sharp. The reason is, that these kind of teeth are really made for eating meat. Wild boars are, like any other pigs, omnivore!
The molars, here only visible two because the third one is still growing inside the skull, are made for chewing plants and they feel blunt.

But now let's check out the upper jaw! I love the "sneak-peek"-hole from the last molar <3 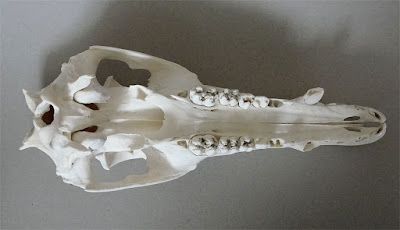 I have a similar skull, a lovely friend of mine gave it to me (Thank you, Martha!). The animal was also still a teenager when it died, but a bit older than the other boar. Maybe about 20 month old.
The upper canine seems to be a permanent tooth and even the openings of the molars 3 are advanced, like a breakthrough. 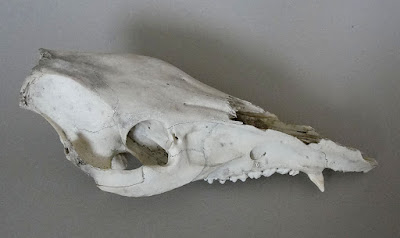 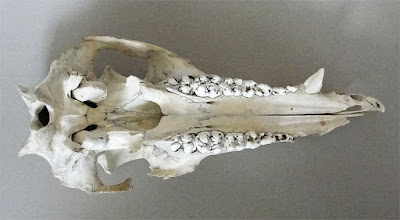 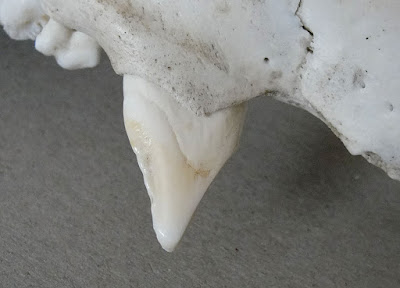 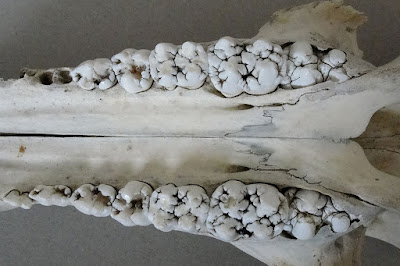 Too bad that the lower jaw was missing. Also sad that the skull is damaged, maybe a fox munched on it. But it's still very interesting.

Oh, and an amazing fact I learned about the tusks: they grow their whole life! Especially males develope big and nasty looking "fangs". They need it for fights, to attract females and also for to dig in the gound. Also, the upper tusk sharpens the lower tusk while the boar is chewing. In the German language the upper tusk is called "Haderer", the lower one "Hauer" and together they are "das Gewaff". Do you have English names for these two teeth, too? Please, let me know!

Too bad I don't own a skull of a full-grown wild boar. That's a thing I should change, shouldn't I? ;)