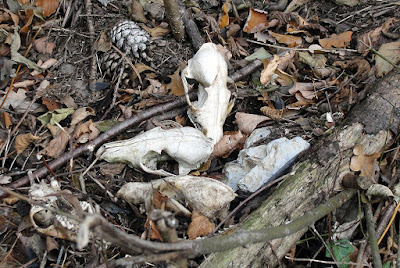 Hi folks! This entry is actually about two new skulls I found in the mountain forest in November 2018. I will describe them, show pictures of them, tell you the story how I found them and compare them to similar skulls I recently have. One of these skulls was a "holy grail", I always wanted to find such one by my own. So, let's meet under the cut!

It has been a while since I was in the mountain forest. I was always busy and, let's be honest, it's always a little strenuous to get there and I'm a lazy butt ^^"


I prefer to be in that forest in early spring and late autumn, because the leaves are down so I can watch better through the shrubs. Sadly, the ground is covered with these leaves now, that makes grubbing a bit harder. But my nose is pretty unerring ;)

On the picture above you see a normal loot in the "dumpster shrug" of a hunter. That shrug is always my first stop before I enter the forest. But the skulls there are often without any canines, so they are worthless for me. But a little, also canine-less jaw piece caught my attention. Because it belonged to a... badger! Where's a jaw might be also a skull. So I digged myself through that shrug and found it! Too bad, also this adorable skull was without any canines! These kind of teeth go lost so easily! *sigh*
I also just found one jaw piece. I have to look after the second one when I'm back there in some time. 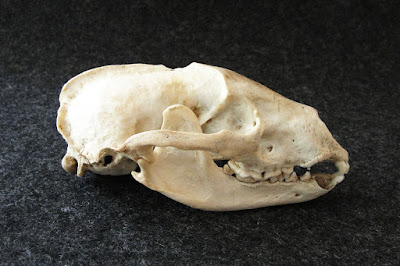 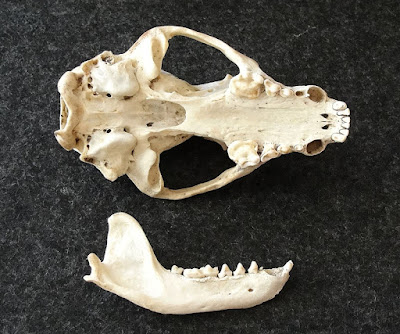 An unusual thing is that the lower jaw was not attached to the skull anymore, because normally the lower jaw of a badger doesn't fall off the skull (see picture below, it's from another badger in my collection). Maybe someone else grabbed the skull, stole the canines and throw it back into the shrub. Or another animal was chewing on it a bit too hard... I will never know. But hey, it really looks nice, that badger skull! 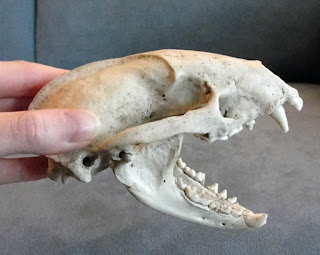 When I look a bit closer to that badger skull I believe it wasn't a very old animal. The teeth are still in a good condition, there are also no other wear and tear on the bones. Only one spot looks a bit porous. Maybe osteoporosis was starting there. Comparing pictures: 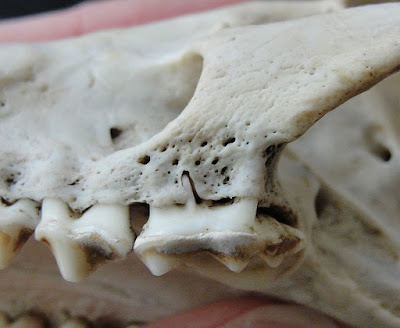 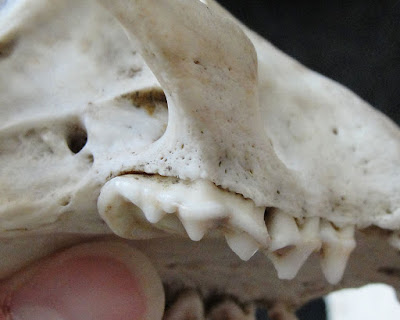 The size of the skull is also not very big, so I believe it was a female.
Actually you can not tell a badgers age by just looking on it's teeth. These animals eat a lot of worms and eat them with dirt so the teeth can get worn down very fast. It depends of the consistence of the ground, a sandy ground makes badger teeth flat very soon.
You only have a chance to know a badgers age if you cut a tooth in half, then you can see annual rings like by a tree. But I'm no dentist and I don't want to destroy one of these precious teeth x3

I have two more badger skulls. One, also a small one, came from an older individual which died somewhere in the forest due of a leg injury. It's teeth were pretty worn down. The other badger skull come from a big male. Look at its size and the sagittal crest (bone ridge on top of the head). Badgers have very strong jaw muscles and these muscles are attached to that crest. A powerful individual also have a bigger bone ridge. 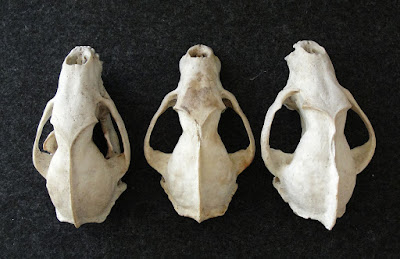 From the left to the right: old one, new one, massive one.
My new badger skull is a bit bigger than the old lady on the left side, but still a lot smaller than the big chunk on the right.

Well, but when I looked closer to the teeth I noticed some damages on one incisor. Seems that the badger-lady gnawed on something which was too hard ^^ Or she used to bite on the right side. 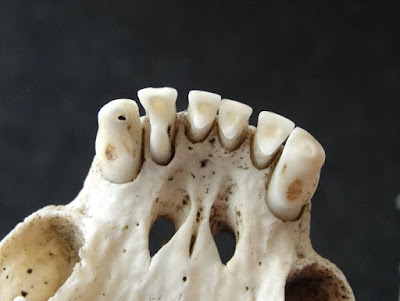 Well, I'm happy about my new badger skull, because I rarely find one. To find such a great skull before I entered the forest was great, so I strolled a bit around that place. Maybe there's more... And yes, found a lower jaw set of a roe deer. But I left it there. I'm very picky nowadays ^^" 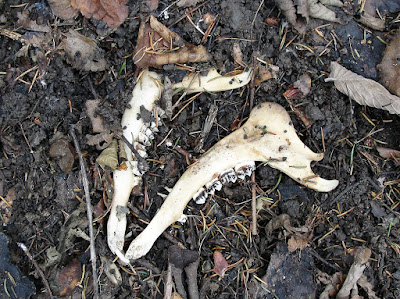 When I'm in the mountain forest I often make my usual tour. There was no time to lose anyway, because when the sun wanders behind the mountains, it gets dark very soon. On my way back I found another holy grail. Actually THE holy grail itself! I just saw the back of the skull, couldn't tell from what animal it was until I hold it in my hand: it was the skull of a male roe deer! Antlers baby! ANTLERS!!!! Sadly, there was some fur and tissue (and maggots) on it, had to clean it first. 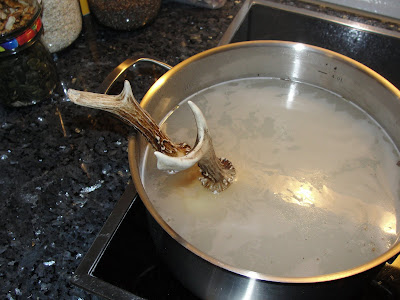 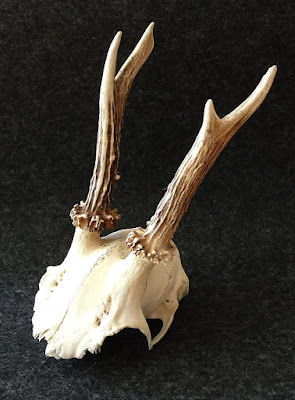 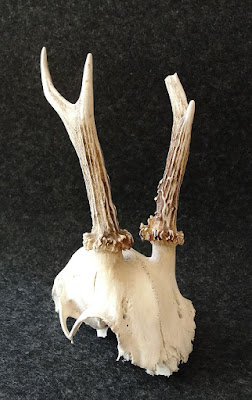 It wasn't a very old one, too. The antlers aren't that big. They even didn't grow equal.
Some joints weren't grow together yet, that's a good sign for a younger individual. 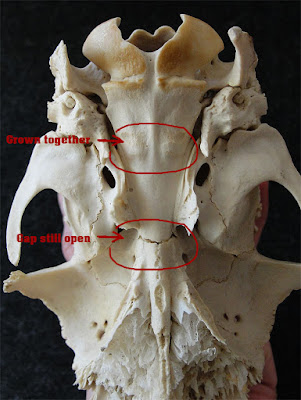 There you also see the "seam" between the antlers. The buck on the right has a more twisting "seam" than the left one, so I really think it must be a bit older. Or he had a better childhood with good weather and lots of food, so he grew stronger? Who knows...

Well, well. If you can read bones (I'm still learning how to), you can tell a lot about them. It's always interesting to compare skulls with similar ones, to look at them very closely. Even if it's a damaged one, it's worth a look at.